It's amazing to me to see how the art of comic books has changed in the last century.  From the very earliest comic books first published in the United States in the early 1930s, which were simply reprints of comic strips from the newspaper, to today's incredible graphic novels, comic book art has a rich history of talented writers and artists and a huge library of subject matter.

True comic book aficionados will argue forever over dates, specific characters and story lines, but my interest lies simply in the beauty and changing character of the visuals.  Even today I can spend hours looking over the rich graphics, brilliant colors and elegant inking techniques, and I admit my own style of art was heavily influenced by the linear style of comic book lines and shading of the comic books of the late sixties. I'm also fascinated how the styles and story lines change with each decade or era, reflecting the culture and society of each respective age.

Famous Funnies is considered the very first modern style comic book, published in 1934, though there were a few prototypes published as early as the middle 1800s (The Adventures of Obadiah Oldbuck in 1842) and the early 1900s ( The Yellow Kid in McFadden's Flats, 1897, the first known full-color comic (The Blackberries, 1901) where the term "comic book" was first coined.

There are  categories of comic books that most fans adhere to:  The Proto-comic books and the Platinum Age, Golden Age, Silver Age, Bronze Age, Modern Age.  It is generally agreed that the first Superman Comic Book ushered in the Golden Age where comic books became the mainstream reading material of American youth.The Age before Superman was the Platinum Era and the Silver Age of Comic Books in the mid 1950s to the mid 1970s was the revival of the superhero to the pages of panels and word balloons.

The Holy Grail of Comic Books:
The very first Action Comics and the first appearance of Superman.
The Bronze and Modern (Iron) ages brought us Spiderman, Green Lantern, The Fantastic Four and the amazing talents of Stan Lee, among others.

Then in the mid 1980s Batman: The Dark Knight Returns and DC Comics Watchmen ushered in the graphic novels of today's artistic style of comic books.

Though most people think of the Superheroes from the Golden Age and Silver Age of comics, the subject matter for these comic novels has spanned the gamut of romance, true stories, horror, comedy and even TV shows, movies and sports heroes:

Did you know that in 1955 there was even a Congressional hearing on comic books? Check it out: Comic Books and Juvenile Delinquency. This came about as a result of a 1954 book by psychiatrist Fredric Wertham where he stated that comic books were a negative form of reading material and a serious cause of juvenile delinquency. This prompted the American Senate Subcommittee on Juvenile Delinquency to investigate, resulting in the Comics Code Authority. Parents could then monitor their children's comic book reading by looking for this seal on the cover: 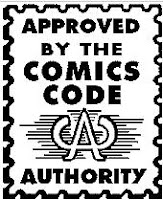 Check out some of these great comic books from past and present: on Art, Gifts & Gear:

Read more on the History of Comic Books at Wikipedia.