I woke up this morning to the news that Senator Ted Kennedy had passed away. With his passing the last knight of America's Camelot has disappeared into the mists of Avalon and a dream of my generation ends.

Despite all the peccadilloes of the Kennedy Clan, those of us who grew up during the Kennedy political dynasty will always remember the energy, youth, exuberance, passion and hope this family brought to Capitol Hill.

In the years since the assassinations of JFK and RFK many things have come to light that have dimmed the glow of the Kennedy legend. The Kennedy armor has been tarnished with the passing of time and rumors of romances, Excalibur disappeared into the lake of Chappaquiddick and we lost our young Galahad, John-John, to the dragon of modern flight. In the last 27 years we have watched as the myth of our own Round Table has slowly been dismantled and our hopes of ever finding our Holy Grail have vanished into the morass of modern politics.

With the passing of the last Kennedy brother, it is the end of an era, the end of Camelot and I feel that loss very keenly this morning. I wish I was Merlin and could turn back time because magic has left the kingdom today. 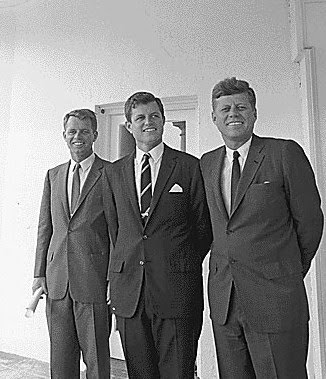 Photos from Wikipedia - Public Domain
Posted by Pop Art Diva Enterprises at 7:41 AM