IS THE PAY PHONE A RELIC OF THE PAST? 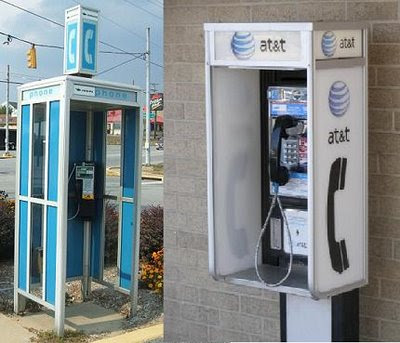 This is what I love about blogs! On my last Old School Friday post, Friday December 12th, I embedded a video of The Turtles' 1960 hit "Happy Together." One of my readers and fellow pop culture fanatic, Pjazzypar, pointed out how the lyrics of that song were also a bit of a history lesson.

There is a verse in this song that refers to making a call from a pay phone, "If I should call you up, invest a dime, and you say you belong to me and ease my mind." The line refers to the fact that, in those days, a phone call from a pay phone was ten cents, thus "invest a dime". This is also where the expression "dropping a dime" (meaning to rat someone out, call the police on them or simply to call someone) came from.

I was a teen at the time this song was released and I remember that my mother always made me keep a dime somewhere in my wallet or coin purse in case I needed to make an emergency call. Sometime in the seventies that call went up to a quarter. The next pay call evolution was being able to use a calling card and, finally, data ports for laptops began to show up at pay phone stations. Now, with the advent of cell phones, the pay phone has almost disappeared from our landscape and I wonder how many of us baby boomers have even noticed.

Once upon a time our world was peppered with phone booths and pay phones. They were something we never really saw around until we needed one. We never paid much attention to them or gave them a second thought because we always figured there would always be one around somewhere. They were so ubiquitous they were almost invisible.

Though mostly invisible and taken for granted, phone booths were a part of our culture back in those days and, through film, they have become pop culture icons. Clark Kent turned into Superman in phone booths, Bill and Ted traveled through time in a phone booth, phone booths have been used to terrorize film characters (Phone Booth), in "The Birds" a phone booth was used to escape insane killer birds - the list goes on. If you watch Dr. Who, the English version of the phone booth has even become a fun Sci-Fi pop icon called The Tardis.

It seems that pay phones are now a thing of the past. Today the cell phone is king and the phone booth has become a relic of yesterday when ten cents was all it took to connect you to the world.

Here's a little history of the pay phone. To quote Bob Dylan, "the times they are a-changing."

Get my Retro Inspired Pop Culture Art on Cool Stuff like Cups, Tees, Cards, Aprons and more at the POP ART DIVA BOUTIQUE!
Posted by Pop Art Diva Enterprises at 9:42 AM