HAPPY FOURTH OF JULY - HERE'S SOME NATIONAL TRIVIA FOR YOU! 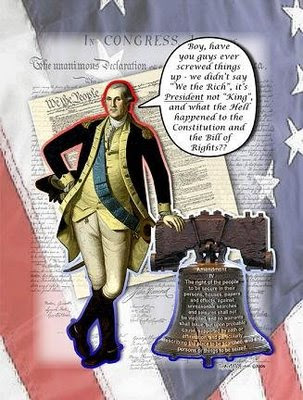 While you're setting fire to sparklers and firecrackers, eating hot dogs and hamburgers and getting bit by mosquitoes -
Here's some fun FOURTH OF JULY TRIVIA FOR YOU!

There are five cities in the U.S. with FREEDOM in their names, the largest with a population of 6,000 is Freedom, California

There is one Patriot - in Indiana.

There are eleven cities with INDEPENDENCE in their name - the largest being Independence, Missouri.

Francis Scott Key wrote the STAR SPANGLED BANNER, which is our national anthem, just in case you didn't know that.

The National bird is the Bald Eagle.

Our National Motto: "In God We Trust"

Our National Flower is the Rose.

Calvin Coolidge, our 30th President, was born on the Fourth of July.

Two Presidents, Thomas Jefferson and John Adams, died on the Fourth of July.

Congress declared the Fourth of July a national holiday officially in 1941.

There are 56 signatures on the Declaration of Independence:

HERE IS SOME FLAG ETIQUETTE FOR YOU:

Do not display the flag in inclement weather.

Whether displaying the flag vertically or horizontally, make sure the canton of stars is visible on the upper left-hand side.

Do not let the flag touch the ground, floor or water.

An unusable flag that is damaged and worn and should no longer be displayed and should be destroyed by burning.

When not on display, the flag should be respectfully folded into a triangle, symbolizing the tricorn hats worn by colonial soldiers in the Revolutionary War.

If the flag is flown upside down it signals distress. It is an S.O.S.

FOR THOSE OF YOU WHO NEVER RECITED IT IN SCHOOL, HERE IS THE PLEDGE OF ALLEGIENCE - If in uniform you salute, if in civies you hold you hand over your heart as you recite:

I pledge Allegiance to the flag,
of the United States of America,
and to the Republic,
for which it stands,
one nation under God,
indivisible,
with Liberty, and Justice for all!

HAPPY FOURTH OF JULY - HAVE A JULY 4TH FIREWORKS MARTINI AND A SAFE HOLIDAY!!!!
Here's a little fireworks for you if you can't go see any or, if it's too dry and dangerous for them, like here in Arizona: