MORE ON THE STARS AND STRIPES 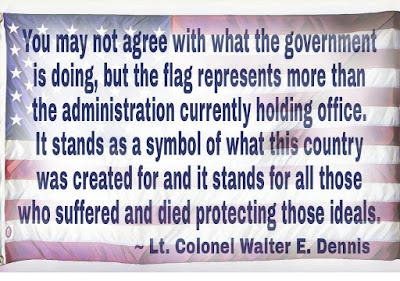 After my post on the 4th of July I received a lot of questions about the rules and etiquette regarding flying the official flag of the United States - the Stars and Stripes - particularly regarding half mast or half staff.

My father was a Lieutenant Colonel in the Army and many of these rules were drilled into my head - especially during the sixties! I never forgot what he told me:


"You may not agree with what the government is doing, but the flag represents more than the administration currently holding office. It stands as a symbol of what this country was created for and it stands for all those who suffered and died protecting those ideals."

As a result of what my father said, though I may do a piece of artwork or post a blog complaining about the politics and politicians of the day, when I display the flag of the United States I give this symbol of what our nation stands for the respect it deserves and I always will. I believe we must always remember to separate the ideals of this country from those who are temporarily holding sway over those ideals.

With that said, here are a few more facts on flying or displaying the flag at half mast:
You may download The United States Flag: Federal Law Relating to Display and Associated Questions here: http://senate.gov/reference/resources/pdf/RL30243.pdf


Posted by Pop Art Diva Enterprises at 6:30 AM