WHO WAS YOUR FAVORITE "TONIGHT SHOW" HOST? 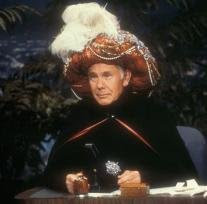 "I KID YOU NOT" - Jack Paar, returned to The Tonight Show 48 years ago today with this quip, "As I was saying before I was interrupted.", after leaving the show in protest over NBC censorship. Paar came to be known as the Prince of Late Night TV after retiring from The Tonight Show, abdicating his thrown to Johnny Carson.

This started me thinking about just how old The Tonight Show is and how many hosts have sat on that thrown of late night talk shows, how many guests have told their secrets and how much history has flickered across the camera lens in the final hours of week day nights.

The Tonight Show is the Mac-Daddy of all late night talk shows. It started in 1954 with Steve Allen as host. When Allen retired Jack Paar took over the seat on the stage and became a late night favorite, making himself and The Tonight Show a bedtime must in the bedrooms of middle-class America.

In 1962, when Paar permanently left the show, Johnny Carson took over and became the reigning King of late night with 30 years of shows as his legacy. Carson handed the crown to Jay Leno in 1992. But, did you know that Ernie Kovacs was a host for a short while in 1956 to 1957? Guests hosts have included Joan Rivers, Bob Newhart, John Davidson, David Brenner, Jerry Lewis, McLean Stevenson and, of course, David Letterman. Were you aware that news anchor Hugh Downs was the announcer for Paar?

The Tonight Show, has been on the air and in bed with America for 54 years, making it the longest running talk show in history. It is the third longest entertainment show in history, following after the soap opera Guiding Light and Hallmark Hall of Fame. This alone would earn it pop culture status.

But the real pop culture in this show lies in the guests and the history it has presented to American viewers for over half a century. Guests have included some of the most influential and powerful people and most of the famous and infamous entertainers in the world. Everyone wanted to be on The Tonight Show. For comedians it was their "golden ticket" and if Johnny asked you to come and sit down with him after your gig that was the thumbs up.

Remember the wedding of Tiny Tim and Miss Vicki? How about The Great Carnak and the animals that always managed to get out of control. Do you remember Ed Ames and the little ax that almost made him Edie Ames? The streaker? Doc Severinsen and The Tonight Show Band. How many times did you go to work the next day and talk about The Tonight Show? Yeah, me too.

For about an hour and a half, five nights a week America could snuggle up with Steve, Jack, Johnny and now Jay and get their daily dose of the Who's Who in American Pop Culture. It's been a nice marriage between American and The Tonight Show and it's heading towards it's Diamond Jubilee.

1960 - Jack Paar returns to The Tonight Show after a month long protest on censorship.