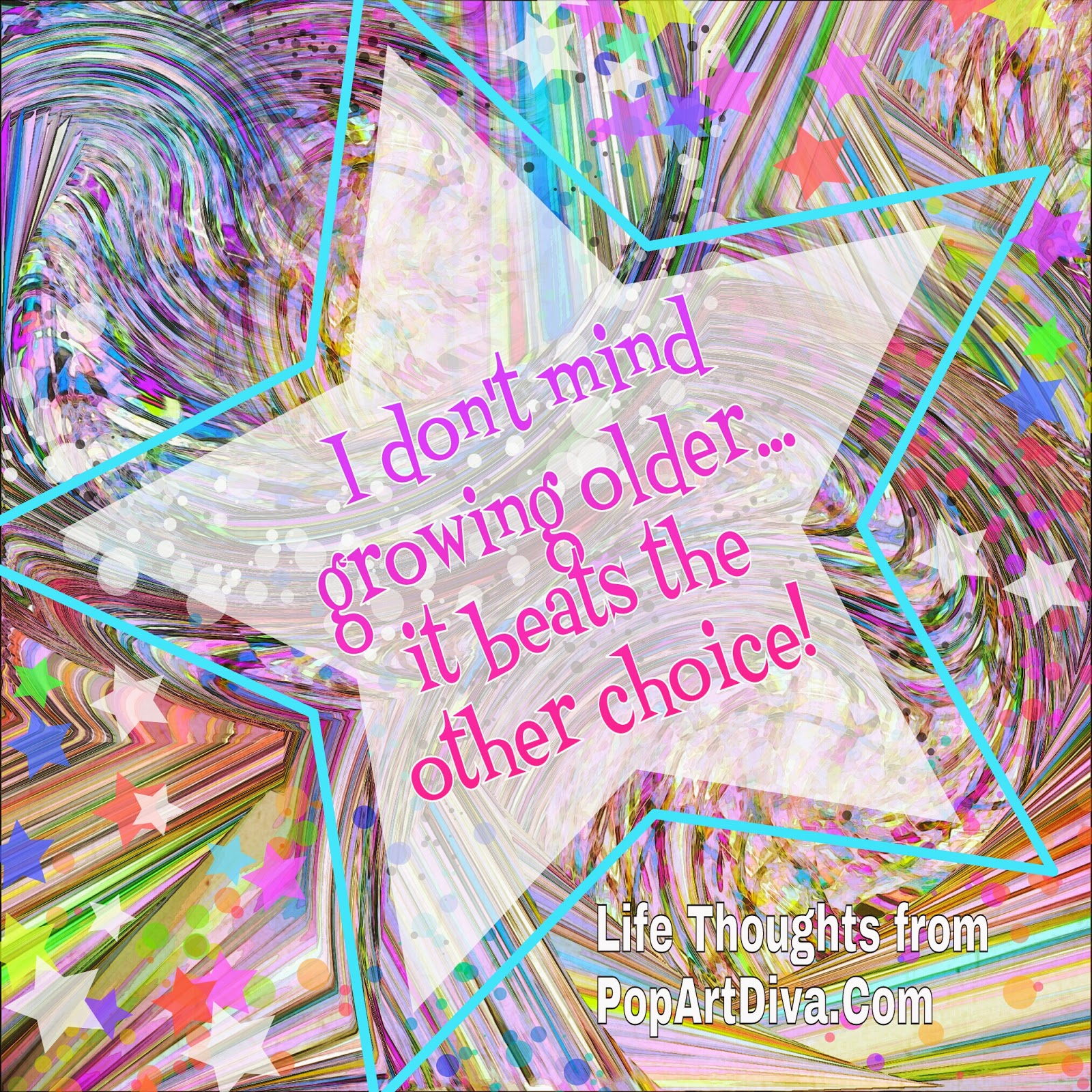 Have a great day!

In Memory of STINKY TINKY CAT 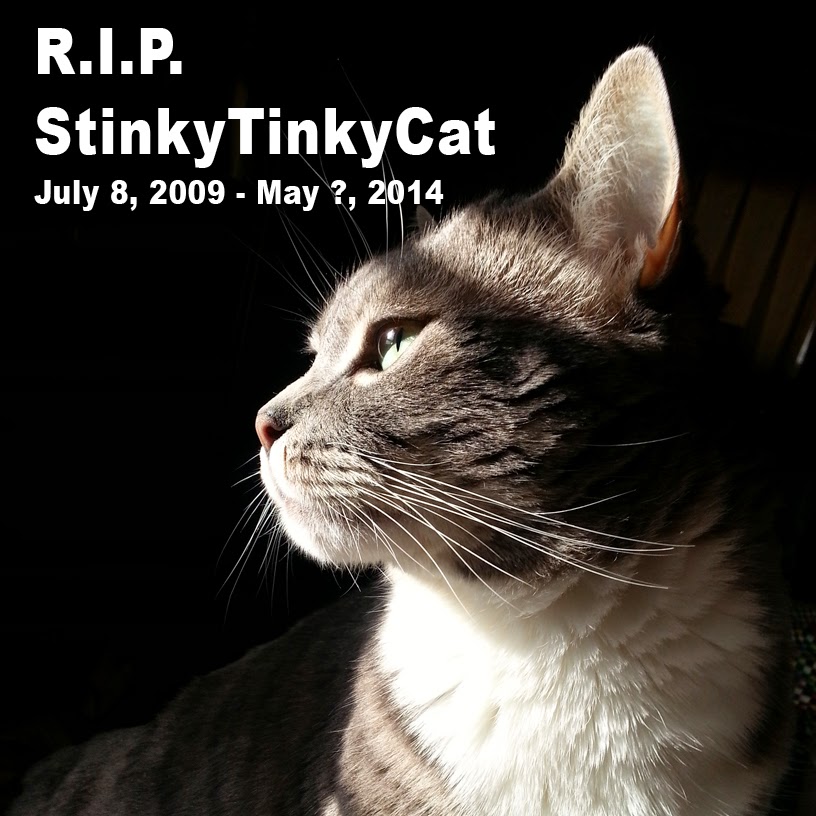 Two weekends ago my kitty, StinkyTinkyCat, escaped (yet again).  The history of his escapes and escape attempts is legend and includes tearing out window screens, pulling up heating vents, racing out any door you open, learning how to and opening any door with or without locks and, finally, literally ripping my back deck door to total shreds THEN bypassing all attempts to board up and block same door.

Tinky was always looking for a way outside so he could hunt and tomcat around.  His attempts both amused and plagued me.  In California, where he adopted me, I was constantly worried about his cat fight injuries, traffic and fleas.  When we moved back to Arizona I had more dangerous worries about his jail breaks in the form of coyotes, birds of prey, snakes, scorpions and getting trapped in an empty house or barn.

I admit I was proud of his intelligence and resourcefulness but the damage he did in his escape attempts was piling up the repair dollars! It was a game we played which he usually won and, since the end of April Tink's efforts escalated to a point of distraction for me as I attempted to keep him confined to the safety of my home and back deck for his own good.

Sadly, on Saturday, May 3rd, my sweet little TinkyKitty found his way out to freedom and has not returned.  I have tried to keep hope alive but this is the desert and the country and too many dangers to small pets lurk in waiting.  Tinky was very shy and afraid of anyone but Pixel (my Yorkipoo) and myself so I hold no hope someone was able to "steal" him or take him in.  Coyotes daringly waltz through my yard, a huge barn owl lives in the Ironwood tree behind my bungalow and it's rattlesnake season as well.

I know, had he been able, Tink would have come home.  Except for one time in California when he disappeared for five days, he always returned within a few hours of each hunting foray or at least by the next morning.  Many a night I lay awake waiting to hear his meow at the front door so I could let him back into my waiting arms.....and food.

I do still hold out some hope for a miracle but I have finally had to admit that my StinkyTinkyCat has most likely wandered over the Rainbow Bridge and I will not see him again until I cross over to meet him, Shadow, Tinkerbell, Peter Pan & Moki.

Wherever you are, my wonderful, loving, quirky little Tink, be happy, know I love you and miss you.

TINKY, the day he adopted me: 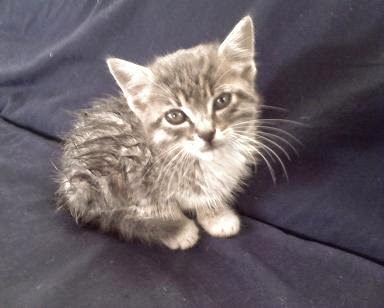 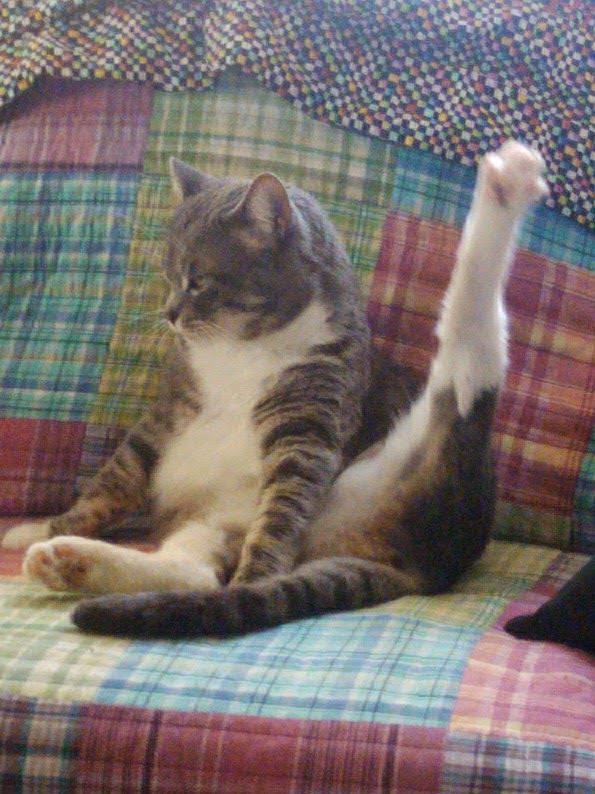 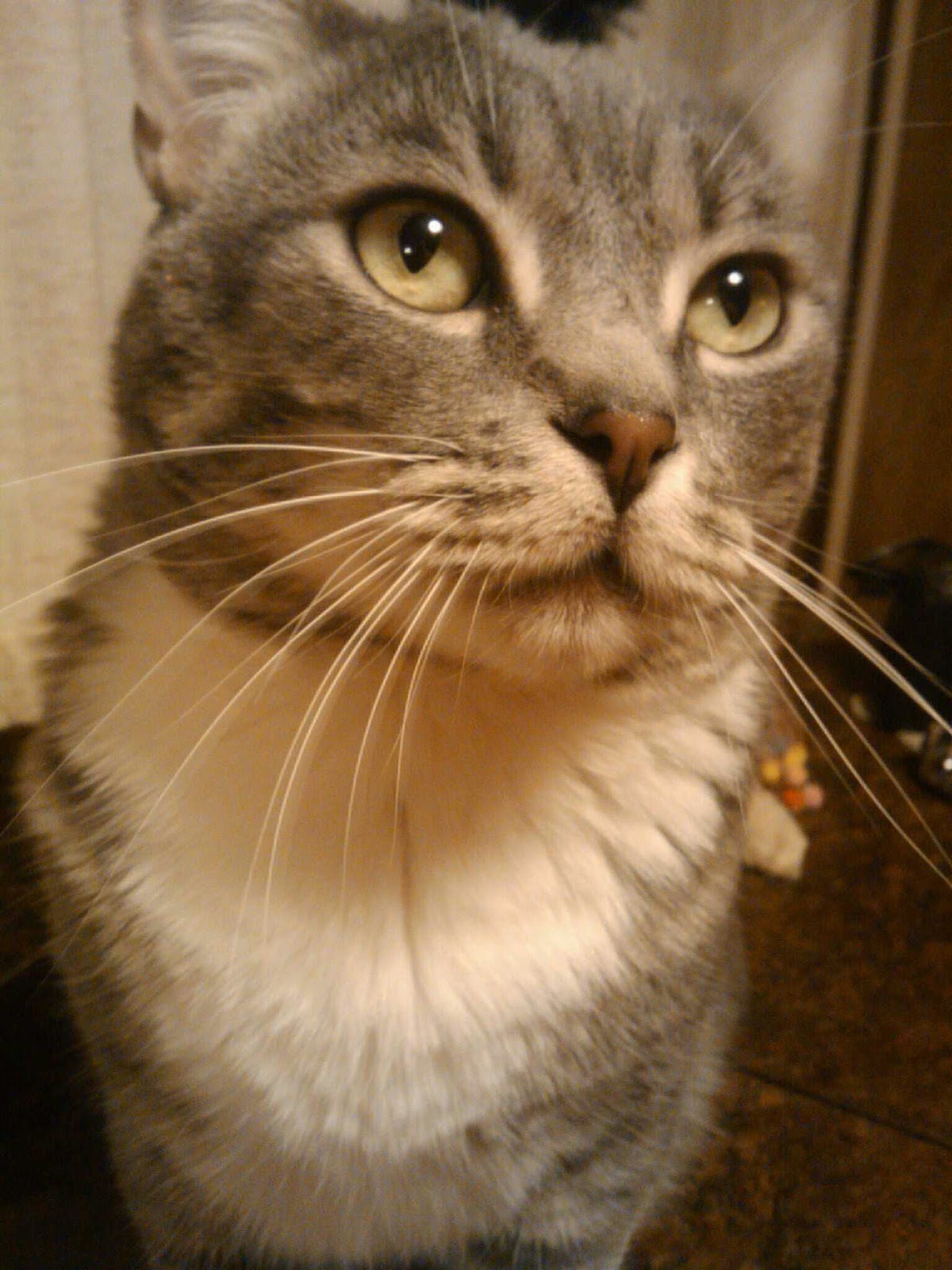 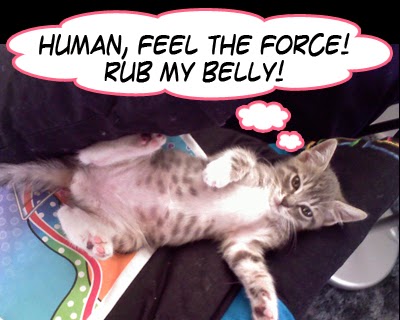 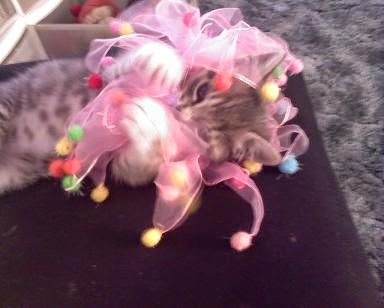 Hand Painted Clay Pots (for plants or whatever!) for sale soon! 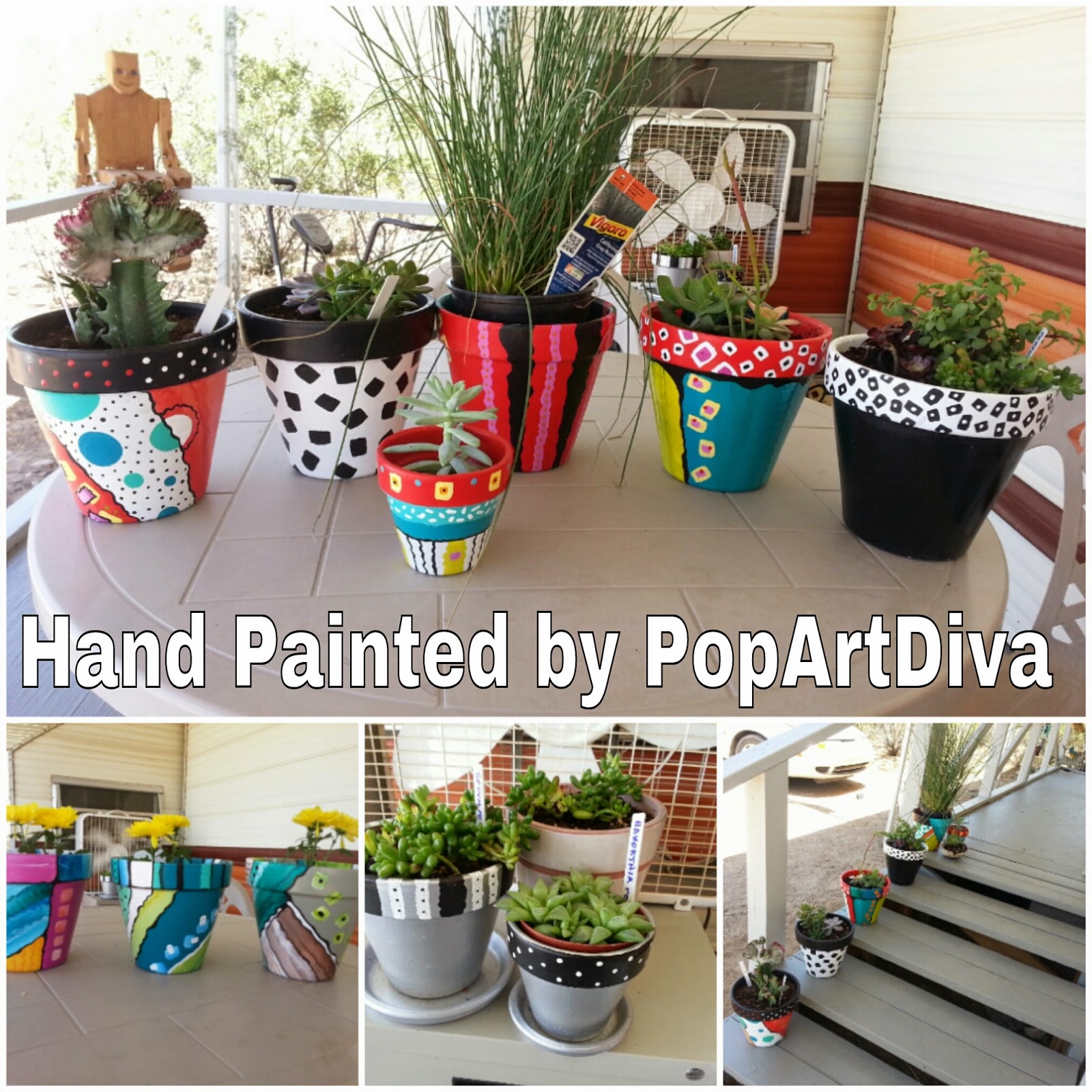 I got the redecorating bug earlier this year and have since redecorated my ENTIRE little bungalow from top to bottom, inside and out!  I was only going to get rid of the horrendous burnt orange carpet and tacky fake wood paneling (this is a 70's park/mobile) but you know how when you start one decorating project it never stops there....
Anyhoo, I got to painting the decks (in my house colors of a light warm gray, white & medium warm grey on the floors) and decided I wanted to pop some color on the decks with decor .... so I grabbed up a bunch of plain clay plant pots, some white spray paint, my acrylic paints and got busy!
I had done a couple of small clay pots a few weeks before for herbs in my kitchen: 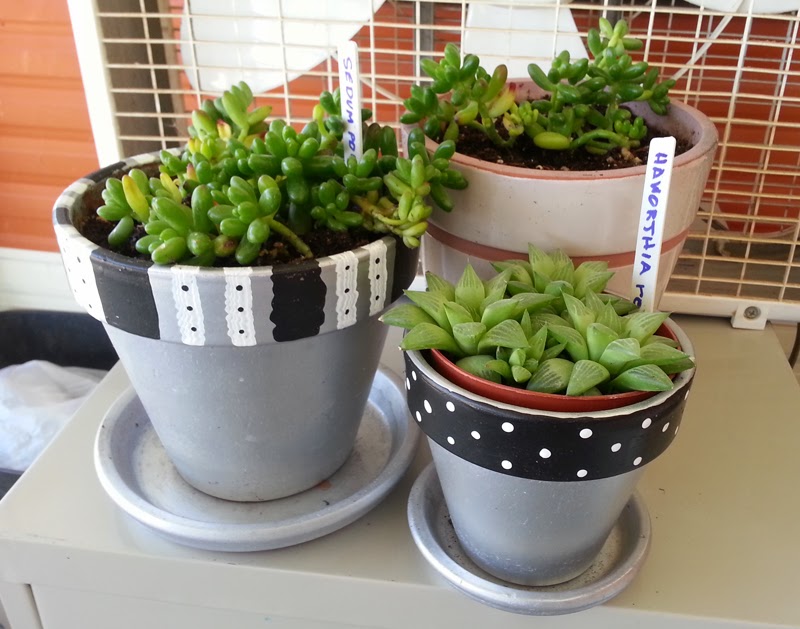 Those gave me the idea of how to add the splash of color to my grey toned decks. After spray painting all the clay pots with a flat white Rustoleum (BEST spray paint available!) I set to laying down my first big areas of my main deck accent colors on the pots: 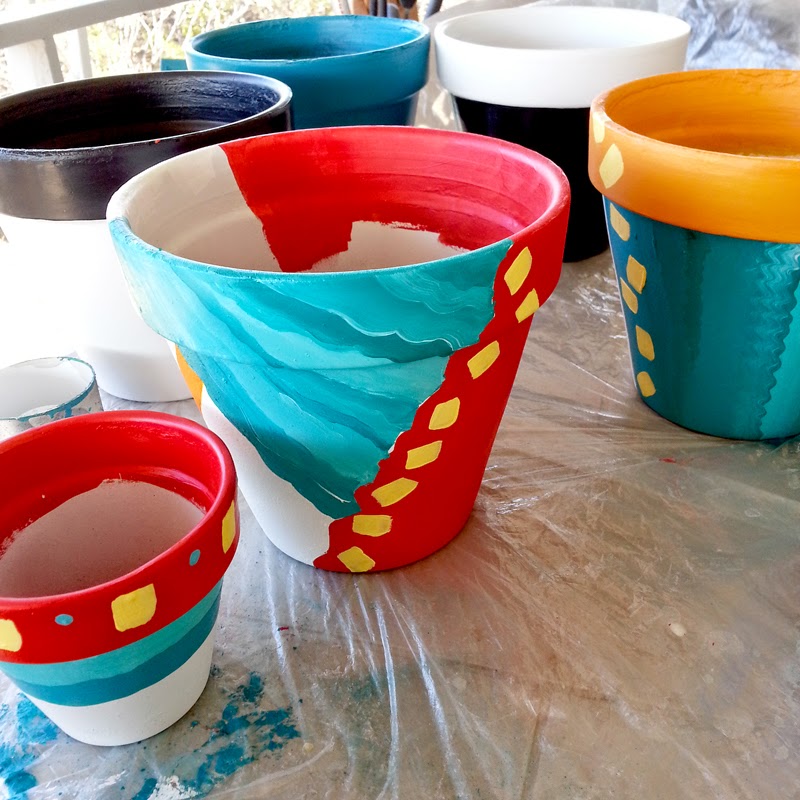 (Note:  I painted inside the pot to just below the soil line so you wouldn't see a bit of the original clay color. Some I stopped at the rim. It all depended on my mood.)

You have to wait for EVERY section to dry before you can touch that pot again so I started working on more pots to keep time waste to a minimal.  Here I am getting into having a brush and color at my fingertips again - man, how I've missed painting! I am having the time of my life!  I love non-representational work best - it's art in the purist form - Color, Texture, Movement, Design, Balance and total love of art: 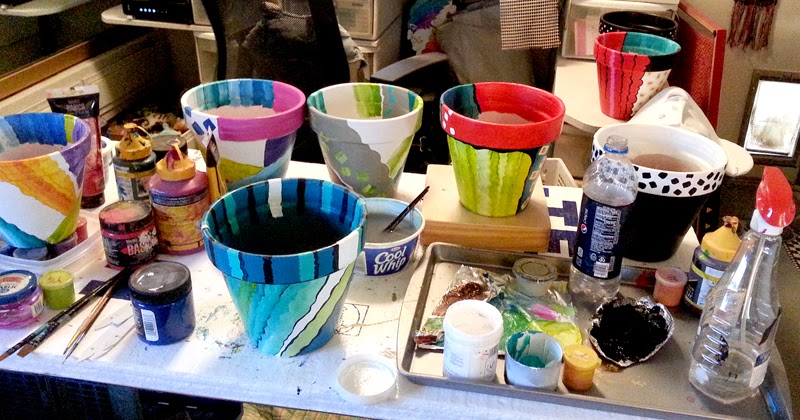 Here's 3 views so you can see the design all around:
(You might be able to click this image to see it larger)

Here they are all filled with growing stuff and lining my deck steps: 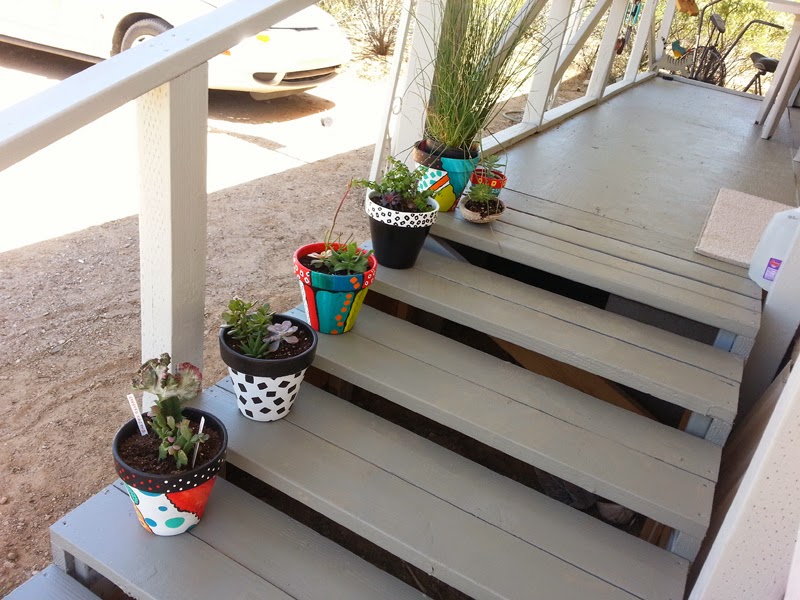 Then I did 3 as gifts for the gals who helped me with me home redo:

THEN I had this clay tribal mask I'd gotten at an art show ages ago & was using to hide my ugly deck light and decided IT needed a makeover too: 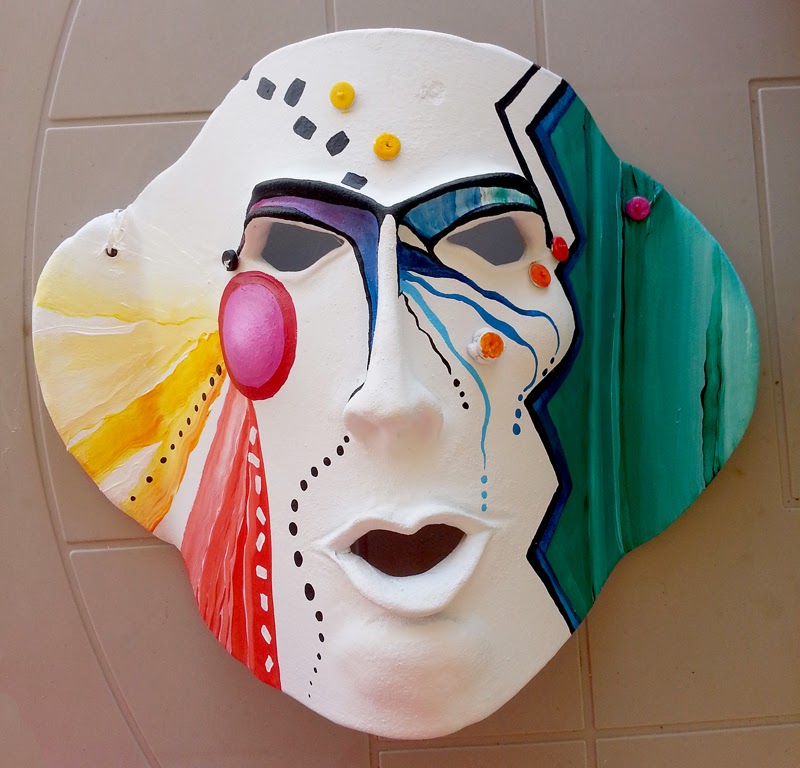 YES! I AM GOING TO SELL THE HAND PAINTED CLAY POTS!