"I Scream, You Scream, We all Scream for Ice Cream"
(How perfect was that phrase in the 1950s?)

I was working away on some graphics on my computer recently when I heard a sound that I hadn't heard in decades - The Ice Cream Truck!


By the way - The Ice Cream Truck song is "Turkey in the Straw" for all you whipper snappers out there!

I swear I got as excited as I did when I was a kid, I ran to my purse, grabbed some money and ran outside just like an eight year old, lol. I was hoping the Ice Cream man had some of my favorites from the fifties - Bomb Pops, Creamsicles and my very favorite, the Banana Fudgesicle! I was happy to see they still had a version of the Bomb Pop and the Creamsicle is still a staple in the ice cream aisle as well as on the ice cream truck but, sadly, my wonderful Banana Fudgesicle had become a thing of the past.

As I giddily hugged my nostalgic frozen treats to my chest and raced back to the house to squirrel them away in my freezer I started thinking about some of the names given to treats for kids in the fifties and sixties. I realized we had a lot of candy and goodies with names that stemmed from our so called "atomic age". We had Milky Way Bars, Mars Bars, Moon Pies, Bomb Pops and Astro Pops. Though I never thought about it as a kid, as an adult I think it's kind of interesting that we were eating anything called a "bomb pop"!
During the fifties and sixties the Cold War was a constant issue. We had bomb drills in school (Duck and Cover!), television and newspapers were filled with stories about the "Red Menace" and people were building bomb shelters in their back yards. We were living in a nuclear age and even our childhood treats reflected the ever present threat of total annihilation! We grew up with the very real fear of having our lives, our families and our world blown to smithereens. Our poor little kid psyches were formed in an atmosphere of H-Bombs, radiation poisoning and the threat of "the end of the world".

Have no fear - The League of Sugar Rush Kid Treats is here! Good Humor Man and Candy Man to the rescue! With the sound of a catchy jingle playing from his truck and the help of liquid nitrogen this Good Humor Man would turn our fears into fun with a rocket shaped frozen confection of raspberry, cherry and lime and Candy Man would sooth our nerves with a binkie of pure sugar goodness!

The Original Bomb Pop®, created by Blue Bunny was an ice cream treat that was a combination of cherry, "blue" raspberry and lime flavors and looked like a rocket ship.

Some people even called them rocket pops because Nestle had a similar frozen confection called Rockets or Triple Rockets®. Popsicle® had their version too called the Firecracker® or the Mega Missile® but the original Bomb Pop was created by "Doc" Abernethy and James S. Merritt in 1955 and is now marketed solely by Blue Bunny. There's even a National Bomb Pop Day celebrated on the last Thursday of June! 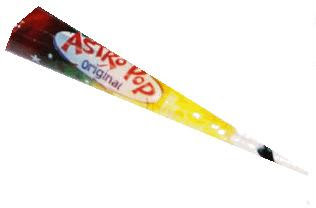 Sadly, Astro Pops are no longer being manufactured. Spangler Candy of Bryan, Ohio (also the manufacturer of Dum Dums) introduced the candy in the late fifties/early sixties to cash in on our national obsession with astronauts and the space race with this rocket shaped confection.

Astro Pops were yellow, red and green, shaped like a rocket cone and the pointed end was the top with the wide end having the stick. I remember the flavor(s) being kind of a raspberry/cherry combination and I also remember that wax bottom! As kids we loved the darn things and used them as spears or lances, poking each other (and ourselves) with the very sticky pointed end.

In the late 1990s Spangler inverted the shape, putting the pointed end on the stick, reportedly this was a result of a lawsuit that claimed a child had been injured by the pointed candy - which actually comes as no surprise to me knowing what I used to do with them! Shortly after the sales dropped and the candy was discontinued.

I gobbled up my Bomb Pops and Creamsicles in a couple of days (I gave that ice cream man $20, lol!) but I will not be without the flavors of these nostalgic treats again - I have created several Ice Cream and Candy Martinis inspired by some of my all time childhood favorites! The flavor profiles are there but with a bit more sophistication and a little kick from some booze. So feel free to download the Free Candy and Ice Cream Inspired Martini Recipe Cards and enjoy a little updated nostalgia yourself!