MAY YOU LIVE IN INTERESTING TIMES 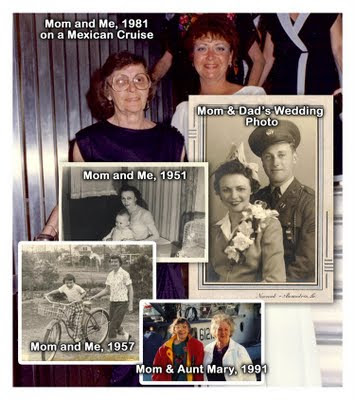 Today would have been my mother's 98th birthday. My mom passed away in December of 1991 and every year I mark her birthday with a little shrine of photos and candles to remember her. This year seems to be especially noteworthy because I recently got most of my personal effects back after having them in storage for nearly 15 years while I traveled the country. The unpacking of these mementos has brought a tide of happy memories and a tidal wave of sadness as well.

I hope you will forgive me the indulgence of memories and a moment of taking stock as I celebrate this birthday. My mother has been gone eighteen years, nearly half the amount of time I had her in my life. The shock of that has made me stop rushing through the days and take a look at my life of the past six decades and attempt to peer into the next decades that are, hopefully, coming up.

Adding to my personal emotional hurricane is one of the most unstable periods in our economic history and a number of deaths of prominent people; popular icons like Michael Jackson and Farrah Fawcett, and political figures, like Eunice Kennedy Shriver and Senator Ted Kennedy. There is something about all these events that seems to mark the end of something personal and historical at the same time. We have been slammed with too many changes, too much shocking news in the last year or so for it not to have some effect on the possibilities of our future. I can see the historical passage, the end of a nation's dream, and I relate to the loss of pop culture icons from my youth, but I'm not quite sure exactly what has passed into the shrouds of time and memory on a personal level.

I know something has because I feel the ending of another era in my life. The hairs on the back of my neck are waving in the wind and the part of me that fears change is screaming "something wicked this way comes" while the other, braver part of me looks eagerly to the challenge as I remember that if nothing ever changed there would be no butterflies!

Something about this summer, especially this last month of August, has tilted the world on it's axis a bit and I feel the winds of change again. I cannot explain it and I don't know exactly what "it" is but I know "it" is coming. There is no logic for this but I am old enough and experienced enough to know that I'm right. A passage has been crossed - at least for me personally - and the times they are a-changing.

There were times in the past when I was very much aware when my life has changed course. In 1991 there were a number of deaths of people that had touched my early life, Gene Roddenberry of Star Trek fame, Bill Graham who promoted so many of the rock legends of my youth, Dr. Seuss, and 2 of my closest friends, among many others. And then at the very end of that year on the 21st of December my mother died. For me this marked the end of my youth. That year I left my childhood behind forever and I knew it.

There was a very popular book some years back called Passages by Gail Sheehy that spoke to the major events in a person's life that mark the passage into a new stage. Though many life stages are predictable their timing is not and for each person the passage is different. I have also realized that many times in our lives we go through a passage without realization. We don't know we've moved through a passage until we wake up a few years later at a new address! Sometimes we pave the way for the move and sometimes we are just thrown into a new location, either way we have moved into another stage of our life. This has happened to me often, I can look backwards and realize how my life had changed, but I was not always aware of the actual moment it did because I was busy living my life. But this time, as in 1991, I am aware the world has changed in a way that will also change my life.

There is an old Chinese curse/blessing that states "may you live in interesting times." I have been the benefactor of that curse/blessing, as have most of us from the baby boom generation. We have seen our leaders assassinated before our very eyes, we have watched our loved ones perish in rice paddies and deserts half way across the world, we were part of the kingdom of modern day Camelot, we have seen man walk on the moon, and we became Stardust at the quintessential event of a generation. Technology has taken us to places where "no one has gone before", we have watched great nations fall, we have seen terrible atrocities against humanity, we have witnessed great heroism and we stood still in shock as great and horrendous tragedies befell our nation and it's people. Though we may not always have been aware of it at the time we have lived in "interesting times" and those times had their effect on us.

Today the realization that my mother would have been nearly a century old has made me pause and look back in a way I have not done before. Today I became acutely aware of the fact that I am now well over the half century mark and I have seen and experienced quite a few "interesting" times. I guess I'm wondering if this well used old body and this nearly sixty year old brain are up to the challenge of the changes coming. It's the first time in my life where I have had doubts whether I am up to the "brave new world" that I feel is coming at me at warp speed and I find myself wishing I had a time machine and could look into the future - just this once.

Oh, well 'if wishes were horses, beggars would ride' as my mom used to say. I guess I shall just have to gird my loins, take my Geritol and face the future with the same stubbornness, tenacity and sense of humor that has gotten me this far. I can thank my Mom for those qualities.

And Mom, Happy Birthday. I never go through a day without thinking of you and missing you still.

Change is the law of life and those who look only to the past or present are certain to miss the future ~ John F. Kennedy

Posted by Pop Art Diva Enterprises at 11:59 AM