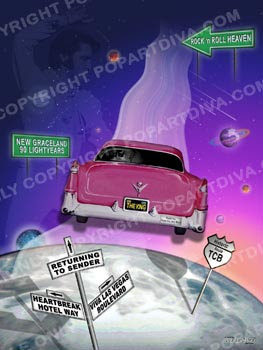 LADIES & GENTLEMEN,
ELVIS HAS LEFT THE BUILDING!
A LITTLE NOSTALGIA AND TRIVIA ON ELVIS' BIRTHDAY!
Those of us old enough remember that when Elvis left the stage at a concert they would announce, "Elvis has left the building" - most people alive have heard this phrase though most won't know it's origins.

The full original comment was, "Please, young people... Elvis has left the building. He has gotten in his car and driven away.... Please take your seats" and was spoken by Horace Lee Logan on December 15, 1956 to ask the audience not to leave the concert hall to see Elvis as he left but to remain to see the other acts on the bill. Subsequently, following most of Elvis' concerts, Al Dvorin, Elvis longtime announcer started using the phrase in the hopes of dispersing the audience who often lingered in hopes of an Elvis encore.

The phrase has since become part of pop culture and folklore and it is this phrase which sparked this Elvis painting I did above entitled, "Ladies and Gentlemen, ELVIS Has Left The Planet" - a little parody on all those Elvis sightings that still continue to this day. I am not one of the fans who believes that Elvis still lives though I am sad he does not.

Elvis would have been 74 years old today. I find it hard to imagine him that age, in my mind Elvis will be forever Young Elvis - raw and revolutionary or the Elvis of 1968 -vibrant, sexy and a talent that soared.

YOU CAN GET MY ART TRIBUTE TO THE KING, ELVIS PRESLEY ON TEES, TOTES, CUPS & MORE BELOW:

You can get my tribute to Elvis, Ladies & Gentlemen, ELVIS Has Left The Planet, as:
Elvis - A Fine Art Giclee on Canvas in various sizes
A 16"x20" Elvis Poster
Elvis Apparel, Home Decor and other fun Gifts

Get LOVE THAT OLD TIME ROCK AND ROLL - The Elvis Version on apparel, home decor and other gifts here.
Posted by Pop Art Diva Enterprises at 9:07 AM