Are We BABY BOOMERS or BOOB TUBE BABIES? 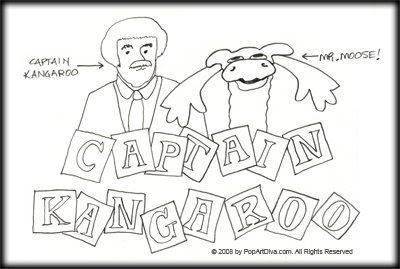 Normally I post a retro commercial on Mondays but, as this is the last week of 2008, I thought I would post one of my short stories from my upcoming book, working title: The Boomer Comic Book Self Improvement Guide - A funny and poignant memoir with self help tips in comic book format.
This story explains a little of my fascination with television, retro commercials and nostalgic jingles.

Baby Boomers or Boob Tube Babies?
Because baby boomers were the first generation to grow up with television it was a large part of our life and our childhood memories. Most of us have fond memories of Saturday morning serials like the TV cowboys, science fiction serials, dance shows and cartoons. We watched Ed Sullivan, The Honeymooners, and other classics and got our news from Walter Cronkite. We only had three networks, but we had some great programming!

Born in 1951, I was a TV addict from my earliest years. I spent many a Saturday morning watching my favorite kiddie show, Captain Kangaroo as well as cartoons like Looney Toons, Mighty Mouse and Bugs Bunny. I never missed Soupy Sales (remember White Fang and Black Tooth?) and I also loved the TV cowboys like Hopalong Cassidy, The Lone Ranger, Sky King and Roy Rogers. In the evenings my whole family watched classic series like Father Knows Best, Dr. Kildaire, Adventures in Paradise, Uncle Milty and my Mom's favorite, Perry Mason. 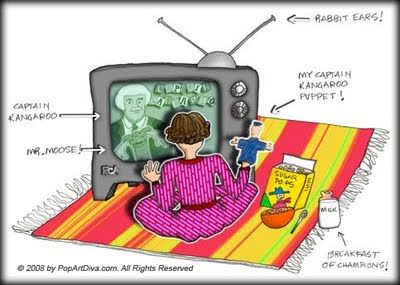 After school I would run home to watch Howdy Doody or a favorite cartoon. But my sister, Patty, would insist on watching American Bandstand or a local dance show. If her show was on the same time as one I wanted to watch I was forced to give in to her demands. In those days I was still smaller than her and she had no problem using her physical advantage to bully me into submission! My brother didn't fight over the television in the afternoons because he was at Little League, but Saturday mornings he ruled the rabbit ears. The older sibling issue left me with a very small window of control over the TV programming!

I quickly discovered that waking up early was a sure fire method of having the boob tube all to myself and this soon became a habit with me. I would go into the kitchen, grab my favorite sugar filled cereal of the moment, some milk, a bowl and spoon and plop myself right down on the floor in front of our black and white RCA console. I had a good hour or two of me time and the television dial was all mine. As the youngest of three children in a two bedroom home this was a luxury of alone time that I rarely experienced and one I treasured.

Many of my toys involved television shows, my Captain Kangaroo hand puppet, my lunch boxes and even a Howdy Doody marionette were all precursors to today's blatant brand merchandising. I hoped for dolls shown on the commercials and begged for the latest and sweetest cereal. Television helped me learn to spell and count (remember Miss Maryanne on Romper Room?), taught me manners (Mr. Moose and Mr. Greenjeans) and even helped me learn how to grow up as I watched Kitten and Princess on Father Knows Best.

As I grew older television stayed a large part of my life as I watched shows like Hullabaloo, Shindig and The Monkees. I remember seeing the very first Star Trek episode, and I watched history unfold during the Moon Landing, the Viet Nam war and, a few years later, the Watergate scandal. I had a front view seat to the world in black and white and, later, in living color and even the commercials were part of the fun. Television was a miracle, a theater in the home, a babysitter and sometimes even a best friend.

I grew up singing the themes to television shows and commercials, wearing pedal pushers washed in New and Improved laundry detergents, fiddling with the rabbit ears and eating dinner on TV trays. I may well have been born a Baby Boomer, but television turned me into a Boob Tube Baby.

To this day, I still love television. It is still my habit to get up early and watch a little television before I start my day. I use television to wind down and shut my brain off at the end of the day. Television is a window to the world with the news and gossip shows, a connection to far away places and long ago times. Even though the internet has encroached on television's territory, to me it is just another tube to watch, you can even watch television on the computer and your cell phone. What a world this has become in half a century.


Posted by Pop Art Diva Enterprises at 10:18 AM