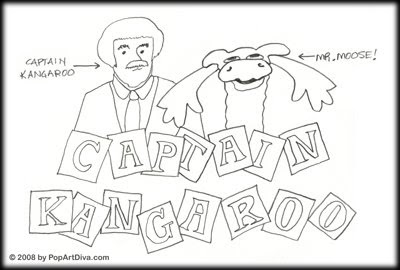 I am in the process of writing and illustrating a comic book style graphic novel on growing up as a baby boomer and this week I was writing about growing up as part of the television generation.

We baby boomers were the first generation to be really influenced by this new medium. We watched cartoons and western serials on Saturday mornings and ran home from school to watch the now classic kiddie shows like Howdy Doody and Soupy Sales. Our older siblings were dancing to the tunes on American Bandstand while we were laughing at the antics of White Fang, Black Tooth, Clarabell, Flub-a-dub and Dilly Dally.

I had my favorites that I watched on a regular basis, including Howdy, Soupy, Mighty Mouse, and others, but my favorite by far was Captain Kangaroo. I loved that show and was particularly fond of Mr. Moose, Mr. Green Jeans and Bunny Rabbit. The Treasure House (later renamed The Captain's Place) served as a wonderful fantasy world where animals talked, there was always a carrot in the Captain's giant pockets for Bunny Rabbit (who was always tricking the Captain into handing them over), there was a Magic Drawing Board, and Mr. Moose's knock knock jokes always brought down a rain of ping pong balls on the Captain's Head!

The original Captain Kangaroo show ran from 1955 to 1984 on CBS, starting out in black and white (my era) and turning to color in 1968. The first four years - my viewing years - the show was live. For the first three months Captain Kangaroo aired only on weekday mornings, after that it aired on Saturday mornings as well. Hugh Brannum was Mr. Green Jeans, Cosmo Allegretti was the voice/actor of Bunny Rabbit, Mr. Moose, Dancing Bear, Grandfather Clock and of course, Bob Keeshan was Captain Kangaroo.

Some fun trivia about Captain Kangaroo:
Those giant pockets on Captain Kangaroo's suit were the basis for his name - Kangaroo!
Bob Keeshan (The Captain) was the original Clarabelle the Clown on Howdy Doody!
The first show premiered October 3, 1955 - the same day as The Mickey Mouse Club!

Get my Retro Inspired Pop Culture Art on Cool Stuff like Cups, Tees, Cards, Aprons and more at the POP ART DIVA BOUTIQUE!
Posted by Pop Art Diva Enterprises at 8:57 AM