A GENERATION OF EASY RIDERS - BABY BOOMERS ARE BORN TO BE WILD! 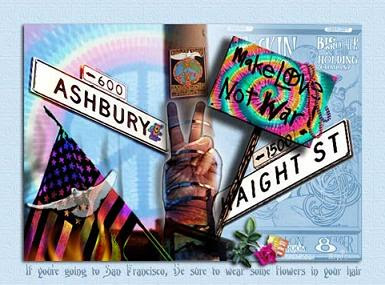 The Sixties Generation is available on PopArtDiva.com as archival prints and giclees on canvas.

1954 - The First mass innoculation with the Salk vaccine against polio began.

Today is Peter Fonda's birthday, he is 68. Peter Fonda - Easy Rider, the two are synonymous in my mind. Written by Fonda and Dennis Hopper, Easy Rider was the rebel biker film for the sixties and it's theme song, "Born to be Wild" by Steppenwolf, was the anthem for our generation. We were outcasts - anti-establishment, anti-war, anti-everything. At least we saw ourselves that way.

Easy Rider was a symbol of all that we thought ourselves to be - wild, untamed and authority challenged. We were going to change the world and to some extent we did. We were told to trust no one over 30 and we took that to heart.

Almost forty years have passed since Easy Rider and my generation is now well over 30. Many of us are more than twice that age. Time marched on while we marched in protest. Most of the protests we participate in now are the ones in our creaking bodies. We're still anti-things, it's just anti-gas, anti-inflammatory and anti-aging.

Yeah, man, we got old. But we are still rebels. We are not going gently into that good night, we will not let age define who we are, we are still a generation who loves change. We demanded more from our world then and we demand more from our world now. We even expect more for our old age - Dennis Hopper says it all in a current ad when he says "time to redefine...your generation is definitely not headed for bingo night."

You got that right, Dennis. We redefined the sixties and we will redefine our golden years. Our motors may have slowed but they're still running and we're heading down that highway in the twilight of our years - still looking for adventure, racing with the wind. Never wanna die!

Peter, Happy Birthday.. It was great to see you in "Wild Hogs" looking pretty darn sexy for a man of 68. You go, Captain America, you still da man!
Posted by Pop Art Diva Enterprises at 12:47 PM