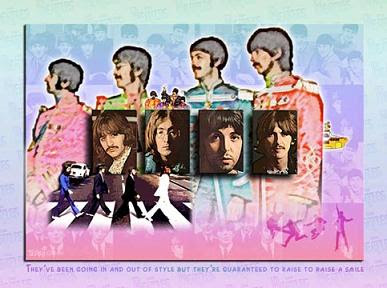 This is my art tribute to my favorite musical group of all time, The Beatles - "In and Out of Style - dedicated to the Fab Four". Visit the page for some fun facts and trivia on The Beatles!

Today, as part of their 50th Anniversary, N.A.S.A. will be beaming the Beatles Song "Across The Universe" out into space (yeah, yeah, yeah, across the universe - get it?)

I gather they used this lesser known Beatles song primarily because of it's title, but also because today is also the 40th anniversary of the original recording of the song.

The song will be beamed out at 7 p.m. E.S.T. so turn on all your tri-corders to witness this historic event - the first time a song has been sent into space! (No, I'm sorry, your gigantimous speakers in your car do not count - loud as they are their sound never carried past the ionosphere!) It's being sent in MP3 format so let's hope who ever is out there has an Ipod!

Traveling along at 186,000 miles per second towards the North Star should bring the tempo up past dancing rhythm - at least on this planet. Who knows how fast little green men (and women) like to dance? Appropriately, Sir Paul McCartney's response to this honor was "Give my love to the aliens". I wonder if Sir John's response would have been, "We come to Give Peace A Chance"?

N.A.S.A. has given The Beatles a Ticket to Ride!." Happy Birthday, N.A.S.A, and thanks for giving us the moon!!
Posted by Pop Art Diva Enterprises at 7:31 AM