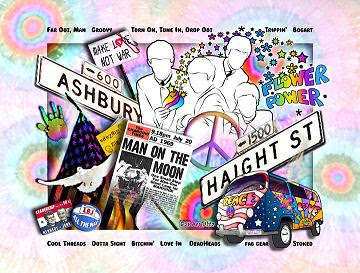 I was listening to The Beatles tune "When I'm 64" today and it got me to thinking - always a dangerous thing. I realized that the first time I heard that song I was 14 years old. Paul McCartney was 15 when he wrote the music (he later added the lyrics in honor of his father's 64th birthday.)

Paul McCartney is nearly 66, a few years past age 64. I am now 57 and creeping up on 64. Somehow, somewhere a lot of years went by when I was busy doing something else.

To me it was just a short while ago that I was mooning over Paul, putting on bell bottomed hip huggers, ironing my hair so it would be long and straight, painting my lips white and getting ready to see "Yellow Submarine", but that was

(An Ode to the Teeny-Bopper I used to be)
We wore hip huggers, love beads, and had long hair,
rolled doobies and burned incense to "clear" the air.
We had love-ins and turn-ons and rallys for peace,
while our peers were off fighting in the very Far East.
The radio played tunes from Beatles to Stones,
while we turned on and tuned out the establishment clones.
Where once we were young - so defiant and bold,
We now watch the world pass and we do as we're told.
And isn't it sad we don't still have that fire,
That changed the world with just a desire?
Forty years later I want to know, "will you still need me, will you still feed me when I'm 64?"