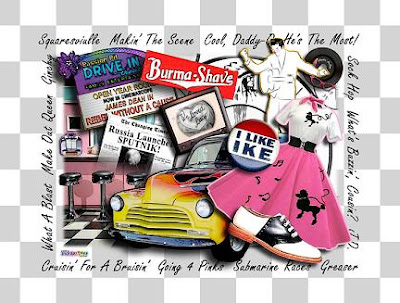 SOCK HOP, BE BOP - MY FINE ART TRIBUTE TO THE FIFTIES - THE DECADE OF MOM, APPLE PIE, ELVIS, LUCY, ROCK AND ROLL AND INNOCENCE!

It's a New Year - 2008 to be exact for those of you who have lost track. And, as always, I find myself looking backwards to the past as I contemplate the future and what it has in store for me. As a fifty-something baby boomer, these are some of the things that I see the most change in:
Do you have anything to add? What's changed most in your view? Send this post out and let your friends add to it - let's see what the world has to say about 50+ years of change. (That little envelope below the post will allow you to e-mail it to anyone, btw!). Check out some cool fifties stuff at Amazon.

HAPPY NEW YEAR - It's a Brave New World out there! And now a little video to take you back down Memory Lane:

Posted by Pop Art Diva Enterprises at 10:04 AM