WOODSTOCK 1969: We Were Stardust, We Were Golden 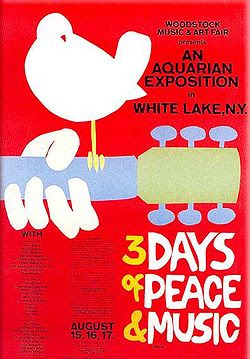 Something unusual happened on August 15th, 1969. Something that has become legend in American pop culture. Wrapped in the fantasies of four decades of baby boomer memories and shrouded by the mists of an entire generation of flower children, a simple music festival became a major part of American pop culture history.

Originally billed as "An Aquarian Exposition" and slated for the dates August 15th through the 17th, it turned into four days (ending on the 18th) of free music and free love that became the Music Camelot to peaceniks and hippies the world over. Thirty two bands and singers ended up performing on that stage in Max Yasgur's farm in Sullivan County, New York in what would become the greatest music event ever. We were stardust, we were golden, we were at Woodstock.

Nearly half a million people attended and I accidentally became one of them. The summer of 1969 had already been a memorable year for me, I graduated from high school and then I watched as Neil Armstrong walked on the moon. I did not consider myself a hippie, I was simply an eighteen year old girl living in "interesting times" and trying to grow up. I was having some difficulties with that and some issues with my parent's vision of my future when a couple of friends invited me to "drop out of all that establishment stress and go to this groovy concert we heard about in New York". With nothing better to do before starting college the next month and never having been to the Big Apple I said, "why not?", packed my duffel bag and hopped into their "Magic Bus" on August 11th, 1969.


All Aboard The Magic Bus
by PopArtDiva 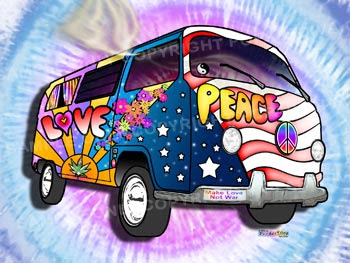 It took us four and a half days to get there and we were late. By the time we arrived the "impromptu" concert was already packed with what looked like half the hippies in the country and they were stoned, dancing, painted up and decked out in feathers, beads, flowers and fringe or just plain naked as a jay bird. The visual experience itself was almost psychedelic and the smoky haze of thousands of joints brought another level of "alternate reality" to the impact. It had also rained and we were standing in mud that promised to suck the shoes off our feet, which is probably why most people were barefoot. Instead of seeing the Empire State Building and the Statue of Liberty I had landed smack dab in the middle of the biggest, muddiest, most epic party of modern history. I was scared to death and excited at the same time.

Wax nostalgic all you want about it, the fact of the matter was Woodstock was an outdoor concert, held on a rain soaked weekend, on a cow field that turned to mud, with no bathrooms, no food stands and no real emergency facilities that was filled with half a million stoned, cavorting teenagers whose only thoughts were sex, drugs and rock and roll. It also had the best line up of music legends ever assembled in one place at one time. It was a once in a lifetime event and it was phenomenal.

I'm not going to tell you Woodstock changed my life because it didn't. I'm not going to give you a blow by blow of my three and a half days in a hot and cold, muddy, upstate New York cow pasture. Except for the music I was kind of miserable but, as I look back forty years later, I am glad I went. I was a part of history and part of something magical, even though I couldn't see it at the time. I may not have enjoyed the marijuana hazed air, the mud, the lack of decent facilities or the lack of food and I might not have been able to see half the now famous acts (though I did shove my way up for Janis, Jimi, CCR and a few others) but I can say I was there when it happened.

No, Woodstock did not change my life, but it took a good chunk of the "midwestern" out of me. I was never a "merry prankster" or a hippy/flowerchild and attending Woodstock did not turn me into one. But I will tell you this, when I get to heaven and Jimi Hendrix asks me, "are you experienced?" I can answer "Yes."


"By the time we got to Woodstock we were half a million strong":


Some Interesting Woodstock facts and trivia:

Those you might think were there but weren't:
The Doors
Led Zeppelin
Jethro Tull
The Byrds
Bob Dylan
The Moody Blues
Joni Mitchell


Posted by Pop Art Diva Enterprises at 9:09 AM