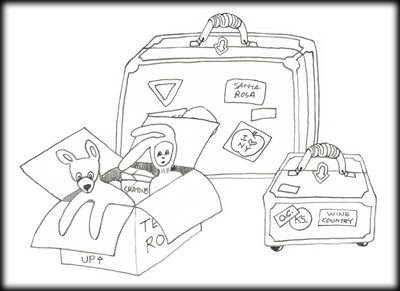 I am moving back to California this week. After many long decades on the road and a lifetime of roving I am going home. This will be my last post from Arizona and my last post until after the first of December. So, have a wonderful Thanksgiving and come on back the first week of December for all your retro pop culture fun!

Please enjoy my memories of a lifetime of moving on:

Families move a lot more now than when I was a kid. I know many people my age who were born, went to school, got married and raised their children in one city. I was not one of those people, I spent my life as a gypsy one way or the other, most often not by choice.

When I was a kid my family moved a lot. Not every year, but often enough to create some real challenges for a young girl trying have friends and be popular. This migratory trend seemed to set the pattern for most of my adult life.

My family moved several times before I was ten, though we stayed within the Kansas borders. When I was twelve my father got a new job across the country and my family, minus my then recently married sister, loaded up the truck and moved to our new home in California. Butthead and I sang "California, Here I Come" from Kansas to the California border. I think Mom and Dad's hair started to gray on that trip.

This move from Wichita,Kansas to Orange County,California was quite a change for a young kid. There I was, a little hick from Kansas just starting Junior HIgh with no friends and no knowledge of the pre-pubescent landscape. I had no idea what was considered "cool", what clothing was considered "hot" or what the regional slang was. What a way to start Junior High! I managed and adapted, after a few missteps and teenybopper gaffs, and I even made a few good friends, some of whom are still part of my life. I was happy enough and enjoyed most of the rest of junior high and the first two years of high school.

After my sophomore year my Father was transferred again, and we packed up our lives and headed to Ventura, California, this time minus Butthead, who was in college. This shift was not as far up the road geographically but a huge emotional distance away from all I had come to see as my life. My best friends, my neighborhood and my comfort zone were all 100 miles south of me and I was yet again wading through the halls of a new school filled with a sea of unfamiliar faces. Once more into the breach, I started the process of making friends, learning the territory and trying to carve a niche for myself in a world of tightly closed cliques and teenagers who "belonged".

After those two final years of high school I made my first move alone as I headed back to Orange County for college. From that point on I moved every few years or so, either to go to another school for another degree or to a new job. I ended up in Silicon Valley for the greater part of my career in advertising art, with only a short side trip to New York City and a very quick move back!

In the mid '80s I took myself further up the state of California when I decided I wanted to leave advertising and the traffic-jam packed Bay Area and live in the Wine Country. For nine years I did the art show circuit around the Northern California peninsula and worked in my home studio in Santa Rosa. This was the longest I had lived anywhere, though I did travel out of state often for shows, my motorhome and mini van packed to the gills with art. I had hoped the Sonoma County would be my home indefinitely, but fate had other things in mind and it used an economic crash to move me away again. This time to Arizona where the fine art shows were thriving.

It was at this point I figured I might as well give in to the gypsy lifestyle and embrace it as my own. I sold my home in Santa Rosa, California, moved into my RV and started what would be 13 years of constantly moving and changing my locales. Following the art show circuit, I would spend the winter in Arizona, the summers in either Colorado or New Mexico, and sometimes part of the winter in Florida! I literally picked up my house and moved it almost every weekend for years!

This last Spring I retired from doing art shows and found myself with the challenge of moving again. Because my new business is online my work can be done anywhere as long as I have high speed internet access. Though my family is gone now, I decided to go back to California because that's where my best friends still live and, frankly, you really can't beat the weather. Once again I started packing boxes, sifting through "keep/don't keep" piles, forwarding mail and preparing for moving day.

I think, maybe, my days of roaming might be coming to a close. This week I'm heading back home. Mom, Dad, grab some cloud up there and cover your ears because here comes that song again:

"California, Here I Come
Right back where I started from.
Where bowers of flowers
bloom in the spring.
Each morning at dawning
birdies sing at everything.
A sunkissed miss said, "Don't be late!"
that's why I can hardly wait
open up that Golden Gate!
California, Here I Come!!!!!"
Posted by Pop Art Diva Enterprises at 5:53 PM