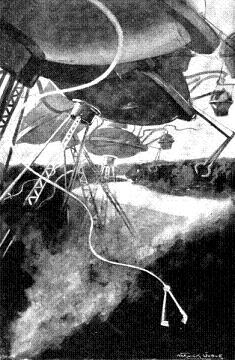 Does anyone remember hearing about the big Martian scare of 1938? A radio show hosted by Orson Wells broadcast H. G. Wells' "War of the Worlds" on October 30th, 1938 on the CBS Radio Network as a Halloween special. Directed by Orson Wells, the first hour of the broadcast was presented as a series of news bulletins that were so realistic that many listeners believed they were hearing actual news broadcasts and panic ensued. (Listen to the entire broadcast in seven parts at the bottom of this post.)

The show centered the beginning of the "invasion" around New Jersey with a "news bulletin" announcing a "huge, flaming object" had crashed on a farm outside Grovers Mills. This was followed by a number of other "bulletins" further describing the horror of aliens "wriggling out of the shadow like a gray snake" with black gleaming serpent eyes and a mouth that was "V-shaped with saliva dripping from its rimless lips that seem to quiver and pulsate".

Keep in mind this was 1938 and war was about to break out in Europe. The national mood was ripe for this kind of "hoax". Orson Wells was criticized for the broadcast, critics claiming his intent was exactly what occurred - to scare the wits out of the American public. Many believed it was a publicity stunt. At the time Wells claimed innocence but years later he admitted his intent was to scare people because he was afraid that the American public was too gullible and believed everything that came out of "that new magic box" called radio. Pay close attention at time marker 6:18 minutes on video below:

Whatever his purpose, the broadcast was the vehicle that launched Orson Wells to fame and it has become one of the most famous radio broadcasts in history, possibly second only to the "day that will live in infamy" - FDR's speech on the attack on Pearl Harbor.

How times and minds have changed in the last 70 years. In today's world we are treated to kinder, gentler aliens courtesy of Steven Spielberg's "E.T. the Extraterrestrial" and "Close Encounters of the Third Kind". Much of the science fiction of earlier eras has become science fact to us. We actively look for life outside our solar system, sending images of peace and welcome to the little green men who might be our cosmic neighbors - heck, we have organizations that specialize in this exact activity like SETI.

We are not the naive and gullible nation of 1938. The only way you can really scare us now is to have a mortgage crisis, see gasoline climb towards $5 a gallon and have us facing the possibility of an American President who might not be white or male.

Uh, maybe we haven't come so far after all.

BELOW IS THE ENTIRE BROADCAST IN SEVEN PARTS - ENJOY!

Post Image is in Public Domain from Wikipedia Commons: Illustrator, Warwick Goble for The War of the Worlds, published by Pearson's Magazine, 1897.