Years ago, I got dragged to see the first Jackass, The Movie

. I hated it.  Okay, I did laugh but mostly I just sat there wondering how anyone could be that stupid.  Which, of course, was the whole idea.
I came home and immediately created a joke martini called JACKASS, THE MARTINI.  It really is an actual recipe (minus one grungy ingredient) but I doubt it's a good tasting one.  No, I did not taste it - the recipe was written as a joke and I couldn't find the Billy Beer anyway.  It was only after I started wondering if you could still find Billy Beer that I realized you actually could make this martini and drink it - if you are of the jackass persuasion!

I am in the process of revamping all my martini cards to print quality for the new TheMartiniDiva.Com and I had to do a new one for Jackass, The Martini.  I was originally thinking of doing a cartoon of - what else - an actual jackass - the animal kind not the human kind.  When I was searching for a photo to work from all I got was images for the new movie, Jackass 3D

which consisted of a skull and crutches for crossbones!
I have to admit I thought it was kind of funny and was laughing when I got an inspiration - why not take my Pop Art Skull silhouette and do martini crossbones???   I got a chuckle out of the idea and went for it. I did the image in both black and white versions for both the graphic and the recipe image for use on dark and light t-shirts and posters.
So here you see my latest graphic for The Martini Diva Boutique, JACKASS, THE MARTINI!  The t-shirts, cups and a few other products have both the main image and the recipe for the martini.
WARNING!!!
This is a joke okay? Like the disclaimer says, I take no responsibility for your jackass behavior and it's consequences!
GET
JACKASS, THE MARTINI
on posters, t-shirts, cups, cards, aprons & other gear!
Tweet
-------------------
Follow me on Twitter

Friend me on Facebook
SHOP THE POP for Pop Art Tees, Posters & Gifts:
The PopArtDiva Gift Gallery
Posted by Pop Art Diva Enterprises at 11:16 AM 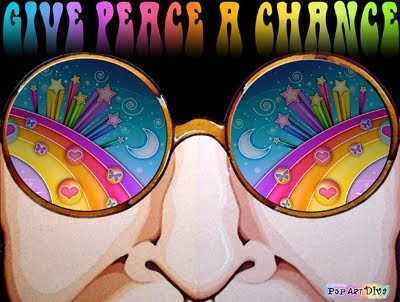 Image ©2010 by PopArtDiva.Com. All Rights Reserved.
No permission is given to copy, share, distribute, reproduce, post or print without written authorization.

TOMORROW - OCTOBER 9TH would have been John Lennon's 70th birthday. To those of us who grew up on The Beatles (we were called Beatlemaniacs) this is a big day. It must be a big day for everyone else too - Google is celebrating it with their first ever animated Google Doodle - check it out below. If you go to Google.com you will have to press the little red play button on the doodle and the animation will play along with a clip of the song "Imagine".


This unique Google Doodle is a wonderful tribute to someone who was so much a part of our lives - a legend in his own time and after his time as well. What you may not be aware of is the artwork is actually inspired and part of it actually is John Lennon's art! The portrait sketch of John that comprises the two "o's" in Google in the animation is a well known self-portrait.

John was quite an artist, having published a number of books which included doodles, drawings and artwork he created. I actually own the original editions of several of these including Spaniard in the Works and In His Own Write. They are filled with his wonderful and whimsical doodles and sketches.

He also created a book of drawings for his son, Sean, called Real Love. John Lennon had an interest in art his whole live - he was even encouraged by a teacher to go to art school because he didn't get good grades in anything else. To quote one of his instructors, Lennon was "Hopeless. Rather a clown in class. A shocking report. He is wasting other pupils' time."

Lennon met Stuart Sutcliffe (the original bass player for The Quarrymen) in art college, by the way, so you can credit John's artist skills with giving rise to The Beatles! John did not graduate from the Liverpool College of Art - he continued his rebelliousness, disliking the structure of a formal art education and dropped out before his final year. His art school experience did not stifle his love of drawing and John created his wonderful, quirky and totally unique art the rest of his life.

It's hard to Imagine John Lennon being seventy years old. Because he was taken from us he remains in our minds as he was when we lost him. He left behind a legacy of great music and creativity for all to enjoy. Imagine how he would have loved that.
HAPPY BIRTHDAY, JOHN
You live on in our hearts. 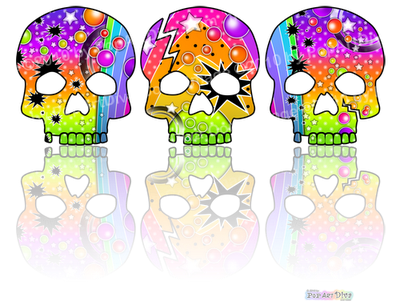 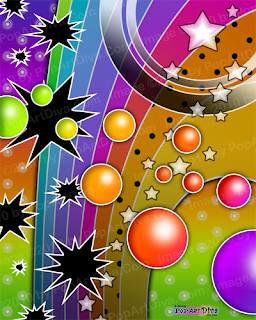 Images ©2010 by PopArtDiva.Com. All Rights Reserved.
No permission is given to copy, share, distribute, reproduce, post or print without written authorization.
Contact PopArtDiva.Com for licensing information.

I have a friend who loves skulls and she wanted me to illustrate a skull for a tattoo. Skulls are kind of not my thing, ya know? Skulls are very goth and goth is dark and scary - not bright, colorful or humorous, all things I tend to infuse into my style of pop art.

But pop art is defined as "a form of art that depicts objects or scenes from everyday life and employs techniques of commercial art and popular illustration." Pop art gets to play with the images that bombard us daily and skulls are all over the place in today's graphics so why not play with skulls?

I am not into goth, dark or scary but I figured why not do Pop Art Skulls in my own psychedelic, sixties pop art style? I love Day of the Dead skeletons so I took my cue from the vibrant way that an image of death is treated in the folk art skeletons of the Day of the Dead celebrations. (If you're not familiar with the Mexican holiday of Día de los Muertos - Mexico's version of Memorial Day - take a look at some of the Day of the Dead images on Google.)

In this series of Pop Art I am taking silhouettes of every day images then filling them with parts of another pop art design I've created. In this pop art design I wanted my typical rainbow colors but slightly darker and less saturated overall so I dropped in black shadows and overlays on the background areas.

I also wanted some solid black shapes to sharpen the colors and to bring in the "dark" element so I popped in some black "holes" and a big graphic black circle for balance with some ghosted white stars shooting out from it. Then in went some big, bright round areas for tension across the front and all of a sudden I was seeing "black holes" and a "big bang".

These all translated nicely on the skulls giving them cracks and shattered areas - like skulls that had been around for a while. I got rid of the jawbone, added some jagged breaks and removed a tooth just to add to the illusion. What I ended up with was a cosmic explosion inside of a human skull. I kind of like the idea of a bunch of black holes and a big bang floating inside a dead head, it's sort of modern day physics meets Gothic horror - very fitting so close to Halloween!